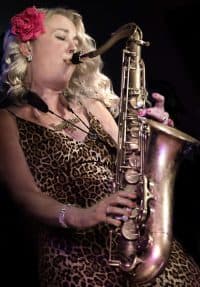 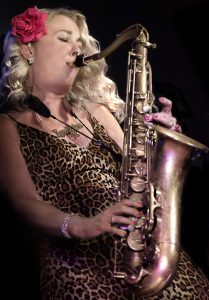 Kim Cypher is creating quite a stir on the jazz scene at present, emerging as one of the UK’s most exciting saxophonists, vocalists and composers and firmly securing a reputation for top quality, stylish, accessible jazz and musical entertainment.

Inspired by the funkier side of jazz and having studied alongside US saxophonist Pee Wee Ellis and internationally acclaimed jazz saxophonist Andy Sheppard, Kim’s style of performance is best described as ‘funky saxophonist meets 1940’s jazz singer’. Kim performs an eclectic mix of music spanning many genres with a quirky, jazzy twist together with her own original material.

Kim’s debut album ‘Make Believe’ was released at the end of 2016, receiving glowing reviews and culminating in a highly successful album tour with sell-out shows across the UK in 2017/18.

Kim’s 2nd album ‘Love Kim x’ (a collection of inspired original music and quirky takes on some well-known classics) was released May 2019 and was listed in the Top 10 jazz albums of 2019 by online jazz magazine Bebop Spoken Here. The album and tour featured Pee Wee Ellis plus some of the finest jazz musicians in the UK and US including saxophonist Pee Wee Ellis, David Newton on piano (14 times winner of best pianist in the British Jazz Awards), Clive Morton on double bass (ex-tutor to Jamie Cullum and long-time sideman with Frank Sinatra and Stephane Grappelli), Karl Vanden Bossche on percussion (Incognito, Jamiroquai, Joss Stone, Sade, Simply Red, Michael Buble), New York guitarist B.D. Lenz to name just a few.

In March 2020 (just before the coronavirus hit) Kim performed a sold-out show in Soho London with special guest Jazz Giant Ray Gelato. This was part of Kim’s ‘For Mum’ project raising money for The Brain Tumour Charity. The project ran alongside release of a brand new original song and video ‘All For You’ in April 2020. The project has so far raised over £2500 for the charity.

Her unique ‘funky’ style of saxophone playing has been built upon influences by great players such as Gerald Albright, Maceo Parker, Pee Wee Ellis, Andy Sheppard, Dean Fraser, Courtney Pine and Grover Washington. Kim’s vocal style has been influenced by the great Billie Holiday together with a wide range of vocalists / performers including Gunhild Carling, Imelda May, Caro Emerald and Liane Carroll.

In 2019 Kim was featured in the award winning ‘Women In Jazz’ book by author Sammy Stein and published by 8th House where she is described as “one of the UK’s most popular players”.

In 2016 Kim was flown to New York with her jazz quartet for a private jazz performance in Manhattan. In 2017 Kim was commissioned to perform a private event for the UK Prime Minister Theresa May.

The Clarke Book that all trumpeters use, and the Rich Willey variations book (as well as many other great books that can be used for all instruments)

Become a supporter of the Everything Saxophone Podcast!

Go to our Patreon Page, and for a small monthly donation (from $2-$5), you get behind the scenes access to footage from the interviews that is not released anywhere else.