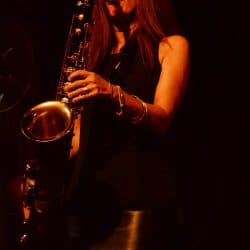 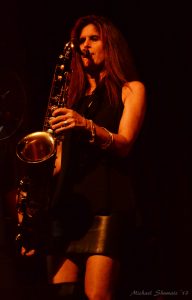 You may not be familiar with Dana Robbins’ name, but odds are you’re already well-acquainted with her unique, bright yet smoky saxophone sound. The Nashville-by-way-of-Ann-Arbor (with a ten-year stop in Los Angeles) Robbins has been a featured player for superstars including Barry Manilow, Roger Daltrey, Frank Zappa, TajMo (Taj Mahal and Keb Mo), Aretha Franklin and can currently be heard in Grammy-winning blues legend Delbert McClinton’s band.

With the release of her new, self-titled, album, listeners will finally be able to put a name, a face and a voice to her sound. Just click on the album’s first track, the sly, tart “Say It Again,” and you’ll understand why Music City insiders consider her an instrumental MVP, a first-call when you’re looking for a sax player.

Having started on piano at age 4 and saxophone in 5th grade, studying with great teachers throughout middle and high school and attending Berklee College of Music, Dana has an extensive music background and some serious chops.

Dana has 3 albums out – you can purchase them on her site at www.DanaRobbins.com

Dana is a Yamaha-endorsed artist.

Say yes and figure it out