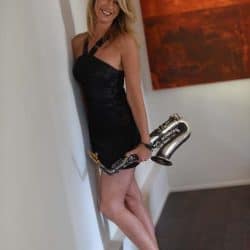 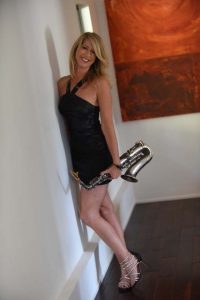 This week, I had the pleasure of interviewing saxophonist and author, Katja Rieckermann.

We had done an interview at NAMM, but the noise level was so out of control, we decided to do a separate interview now.

Katja, originally from the northern part of Germany in a small town called Luebeck, did not start playing the saxophone until age 21. It took a number of years and a bit of a struggle until she made the leap to move to the U.S. and in particular, Los Angeles, CA.

She has performed with rock bands Scorpions and Saga, and has been in television and films like Ally McBeal and Star Trek Nemesis.

In 2001, she got the opportunity to perform with Rod Stewart on his Human World Tour, and continued performing with him for 15 more years.

Since then, she has also performed with Carole King, Al Green, Jeff Goldblum, Carlos Santana, Mary J. Blige, Toto and many others.

She has 3 studio albums out, with guest artists such as Arturo Sandoval and Joe Bonamassa. One of her big singles, Walkin’ the Dog did well on the charts in 2015.

She’s performed with Lady Gaga at the Grammy Awards and also opened up for Tower of Power in Pasadena in 2019.

We did this interview while being sheltered in place, so you will also hear how she’s handling that too.