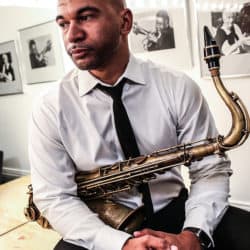 Welcome back to another episode of the Everything Saxophone Podcast! I’m very excited to bring you this week’s episode with one of my favorite saxophone players on earth, Walter Smith III! Walter is one of the top voices in modern music and has recently released his latest album titled, Twio. Walter is from the music hotbed of Houston where he grew up around countless other top jazz musicians setting the stage for his career in music.

Walter studied at the storied Berklee College of Music, learning from countless saxophone luminaries such as George Garzone and Billy Pierce. After developing his own sound and skill set he has since had a busy career playing with the likes of Roy Haynes, Eric Harland, Terence Blanchard, Jason Moran, Sean Jones, and Christian Scott. Walter also has had a prolific career leading his own ensembles and record dates throughout the years.

Walter is a genuine, hilarious guy, and there were a lot of laughs in this episode. We talk about his approach to music, the saxophone, and the music business. I’m sure you’re going to love this interview!

In this episode you will hear: