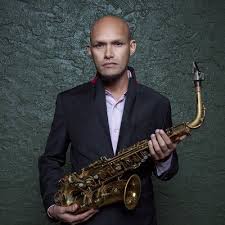 Miguel Zenon is an alto saxophonist, composer, and band leader hailing from Puerto Rico. Miguel has been featured on over 70 recordings as a sideman and is about to release his 11th album under his own name. Miguel is a multiple Grammy Nominee and is also a recipient of the MacArthur Fellowship also known as the genius grant. Miguel lives in New York and also teaches at the famous New England Conservatory.

We caught up with Miguel to talk about his new recording set to come out on September 21st entitled, Yo Soy La Tradicion. We also managed to talk about his move to the United States, his development as a composer and saxophonist over the years and what he does to maintain his high level of playing through a busy schedule. We also chatted about teaching advanced students and asked him our famous five questions. I think you’re going to really enjoy this interview so sit back, relax, and let’s get into it with Miguel Zenon!

Make sure you head over to Miguel’s website to check out everything he has going on and purchase his new record!