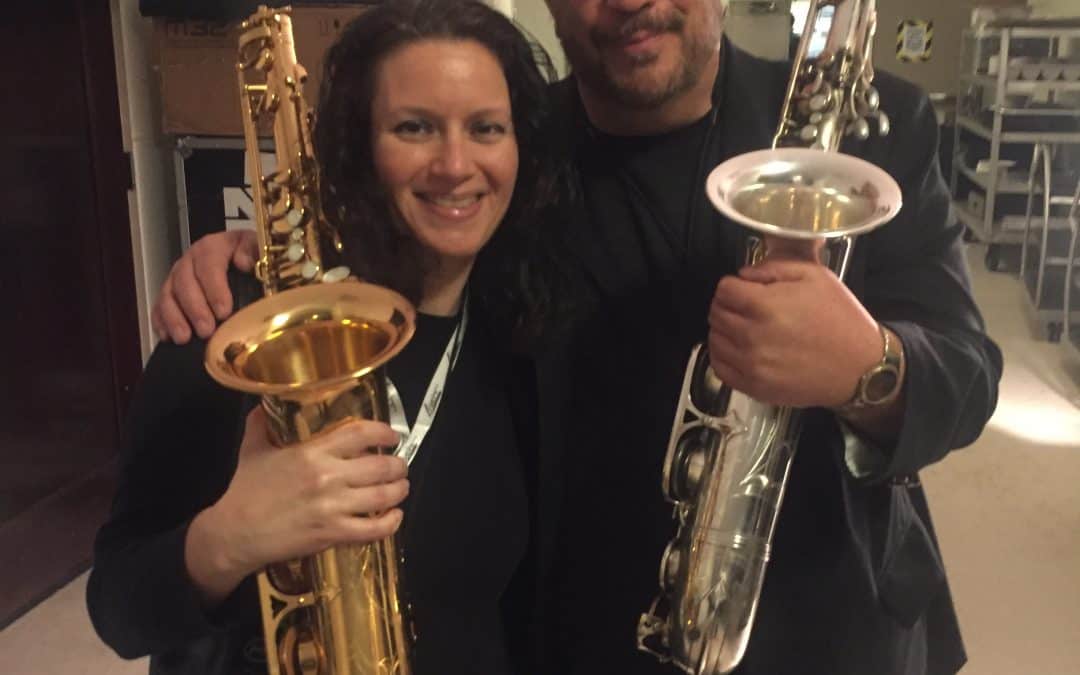 The saxophone and jazz communities suffered a HUGE loss on July 21, 2022.

Tim Price, a phenomenal woodwind artist and educator, who has been featured many times on this Podcast in recent years, passed away on that date.

He had been suffering from a brain tumor for many months.

I had been reading Tim’s articles in the Saxophone Journal for many years, and had gotten to know him over the last 7 years while we met up at the NAMM Show every year in Anaheim, CA.

We jammed together, and often talked about teaching and the state of affairs in jazz music at that time.

Tim’s passing is a HUGE loss for the saxophone and jazz communities.

He would often share his knowledge and teachings on the web over the past few decades.

In 2016, for my (now defunct) BAM Radio Show, I had the honor and pleasure of chatting with Tim Price, world-renowned saxophonist

The theme for this episode is how to teach authentic jazz language, but we also spoke about:

Here is the video interview with Tim Price:

Please note – this is a slideshow, sharing pictures of Tim and myself and Tim at NAMM over the years…

Over the years, Tim Price  has had the extreme good fortune to have bands of his own featuring world class stellar players like Lew Tabackin, Bennie Green,Carl Allen, Ray Drummond, Allison Miller and Bill Goodwin.

Tim’s travels have also taken him to New Orleans in September 2004 for a very special “Coltrane Tribute” with Tony Dagradi, and superstar drummer Stanton Moore from the jam band “Galactic”. The Coltrane event as well as the club “Snug Harbor” was SRO !!
As were gigs that Tim played in the East Coast area with his bands with Rachel Z and drummer Bill Goodwin. At this point in time Tim’s career couldn’t be more positive, things are moving in a very positive way.

A Berklee College of Music graduate and one of the country’s foremost woodwind artists, and a performer and educator worldwide..

His stature at the North Sea Jazz Festival couldn’t have been more prestigious with a backup band of Bennie Green on piano, Ray Drummond on bass, and Carl Allen on drums. Tim’s special guest that night at the end of his set was Dutch superstar tenor titan Hans Dulfer.Tim also has been a special guest with Grateful Dead member Bob Weir’s RATDOG.

He’s spent years in the trenches with the big bands of Tommy Dorsey under both Murray McEachern and later Buddy Morrow, Cab Calloway and Harry James. He’s also been part of Ernie Krivda’s Fat Tuesday big band. Tim’s bassoon has been a part of the Lawrence “Butch” Morris Orchestra at the 2004 “Vision Festival” in New York City.

He loved the soul and rock gigs he’s played with Aretha Franklin, Billy Paul, The 5th Dimension, Lou Christie, Lloyd Price, Four Tops,Ike Turner, Lynyrd Skynyrd and many others from that idiom.

Some people might find this facet interesting considering that when Tim left Berklee he went on the road playing the jazz organ bar circuit. Tim has played with every major organ player except Jimmy Smith. Tim feels that was a great proving ground for a young saxophone player and something that is really missing today- Those classic jazz bars in major cities and small industrial cities scattered through the United States. Playing jazz 6 nights a week in a environ that is a proving ground for your growth.

Mr. Price’s writing on jazz and the saxophone appears regularly in the Saxophone Journal, he has been a featured writer for that publication for over 18 years.

In addition to being the recipient of a Pennsylvania Council on the arts fellowship jazz grant five times!!
His saxophone books are published through Hal Leonard. He currently writes workshop-ma ster class articles for SONIC , the innovative German / Dutch music magazine.

He has authored three books on sax playing, and his blogs for Rico Reeds on Facebook and Myspace appear every Monday.

His original tunes have been recorded by Houston Person, Supersax tenor player Jay Migliori and his composition ” Twins Of Spirit” has been recorded by the Sean Kennedy 5 featuring Bob Mintzer.

Tim performs and does clinics throughout the world. He teaches private instruction in New York City and from his home studio in Reading, Pennsylvania. Professor Price teaches jazz saxophone at the New School University in New York City. He is also a saxophone instructor at Long Island University / Brooklyn campus. His teaching on Skype has become a worldwide trend setter. You can reach him on Skype here: http://www.timpricejazz.com/skype2.html

“I studied Jazz BA (Before Aebersold!)”

The way he learned was via Call and Response, which is what he suggests for teachers.

The difference is that when he uses this technique, he’s not just listening for correct notes; he’s listening for the language – the swing, groove, feel, etc…

The goal is to “get a pocket with simple notes.”

If you give an entire scale right away, it can be overwhelming for the student – too many notes, too many choices.

Music is aural – it needs to be heard.

With just a few notes at a time, students will first internalize the feel and language, and later embellish by accident. The “simpler the better” cements the language into their chops and ears.

“The more notes you give somebody, the more confused they can become.”

Tim was really passionate about students keeping a good pocket; the language of knowing where to put the time.

He suggests that students imagine the steady “dang” of the ride cymbal – by doing this, you won’t need to rely on a play-along to keep time.

It’s all about imagination…