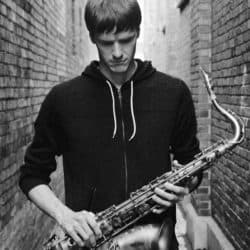 Previously the director of jazz studies at Abilene Christian University for six years, Derek now lives and performs in Chicago, playing in various bands and projects around the area and throughout the world. His recent “BEATBoX SAX” music videos and tutorials on YouTube have been very popular among saxophonists and music lovers alike, leading to endorsements with Legere, JodyJazz, P.Mauriat, BG, and AKG. Derek has performed solo concerts throughout China, Russia, Japan, Germany, France, Poland, UK, Norway, Finland, Malaysia, Latvia, Serbia, Israel, Ukraine, Czech Republic, Bulgaria, Brazil, Dubai, as well as throughout the U.S.

Derek received his BM in Music Performance (Classical and Jazz) from Hope College in 2006 and his MM in Jazz Studies at the University of Cincinnati, College-Conservatory of Music in 2008.

Crossing genres from jazz to classical to funk, saxophone innovator Derek Brown’s unique playing style must be seen to be believed!

Be sure to check out Derek’s audio and video clips, and please use the contact link to book Derek for your next festival or workshop.

In this episode, you will hear:

– how Derek didn’t want to play an instrument at first

– how Derek thinks about taking risks vs. playing it safe

– Derek’s tips for musicians looking to get gigs

– how long it took Derek to reach his vision

– the most important tip for teachers

-what the big turning point was in Derek’s music career

– and why was there so much blood on Derek’s reed, ligature and mouthpiece?

We hope you enjoy this episode as much as we did!